How to Go Down When the Ship of Life is Sinking 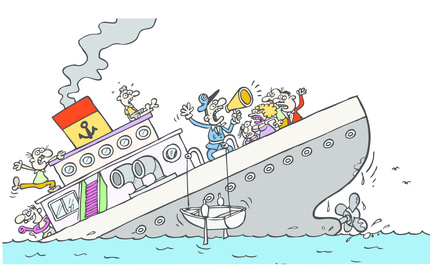 For the love of God, jump!

I can’t remember the last time I laughed. I mean one of those stress-busting hearty belly laughs where tears stream down my cheeks and I can’t breathe. In a good way.

My workplace took a turn for the serious. The ship is sinking. At first it listed. We added more weight to even things out, but all that weight filled the ship with water, and now we’re going down like the Titanic. Some people jumped overboard. Others were pushed, gently and with great sadness, to lighten the load. The rest of us are bailing water like crazy and occasionally getting into catfights.

There’s a rescue ship on the horizon. We can see it, but it’s not here yet.

So we offload more weight and strap on life preservers.

This is the third sinking ship I’ve been on. The first was a travel adventure company that adventured it’s way straight into bankruptcy. The second was a nonprofit that managed their books so badly they didn’t realize they were out of profits until I developed a budget, brought in an ace accountant, and pointed out: the money? It’s gone.

Am I the hex that brings these ships to their nautical knees?

Or am I just boarding the wrong ships?

At a writer’s conference one summer, a respected writer/teacher/book reviewer brutally edited my short story. The first paragraph alone was so bloody from the red pen, the page sobbed in pain. I told myself, I’m not a writer, I’m an actress, and marched across the quad to the empty theater, sat in the back row, and cried.

On Saturday nights, KQED airs movies. This week, it was the Rodgers and Hammerstein musical Carousel. As I watched, transfixed, I remembered working on that show in college, watching from the lighting booth every night while lusting over the set construction manager who lusted over one of the dancers. I remembered dancing the ballet sequence in another R & H musical, Oklahoma, when my partner almost dropped me into the orchestra pit. I remembered shimmying on the grocery store checkout counter as Babe Secoli in the musical Working, and belting songs with a cockney accent in The Roar of the Greasepaint, the Smell of the Crowd.

I remembered those smells, those roars. My heart yearned for what was missing, like a long lost love. I told myself, that’s the ship I belong on, not this sinking tub I’m on now.

Here’s the thing. I could bail, but the lifeboat is sinking too.

It’s not a matter of finding the right vessel for my voyage. It’s a passenger issue.

I was one of those cats fighting last week. That isn’t me. The real me finds humor in the nutty stuff that drives us nutty. But there I was, snarling, showing my claws, ready to jump. Stress will do that to me.

I haven’t found the humor in the situation yet.

However. Until the rescue boat arrives (and it will arrive), I’m committed to going down dancing and singing. I’ll be like those musicians on the Titanic who refused to abandon their instruments, sawing away on their violins as screams filled the air, because as long as they still had breath, nothing had the power to take away their music.