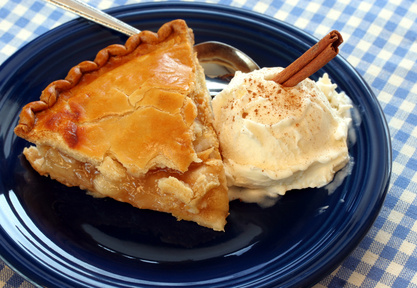 Every night, at eight-thirty to be exact, my stepfather heads to the refrigerator and pulls out the tin of pie that my mother has baked for the week, and from the freezer he pulls out whatever flavor of ice cream is on hand, and he serves a slab and a scoop in a bowl and takes the whole mess to his recliner in the living room and eats it. Every night. Without fail. Unless something prevents him from doing so.

And one night something did.

He was outside blowing the leaves one crispy autumn afternoon when a tiny piece of plaque in his carotid artery broke loose and lodged itself in his left eye. Did this inconvenience stop my stepfather from blowing leaves? No. He paused momentarily and then finished the job. Then he stomped into the kitchen in his work boots and announced to my mother in a cheery tone that he was blind in one eye, which didn’t prevent him from eating his pie and ice cream at eight-thirty.

The next day the doctor did some imaging of the artery. He decided that what was needed was a little spring cleaning, some reaming out of the whole thing. So the doctor advised my stepfather to check into the hospital, which he did, and undergo a two hour surgery, which he did, and then spend the night in the intensive care unit where they do not serve pie and ice cream.

After the pie-less night in the hospital, the doctor released my stepfather, properly bandaged. Back at home my stepfather ate a light dinner and then prepared for bed. He took off his boots and socks and pants and yanked his sweatshirt over his head, catching one of the bandages in the process, and ripped open the wound. He hollered for my mother.

She ran into the bedroom and found my stepfather standing naked with blood trailing down his neck and onto the floor. She grabbed some tissues and applied pressure. Grabbed some paper towels. Grabbed a washcloth. Realizing she needed help, she grabbed the phone and told my stepfather to put on some pants.

Two paramedics arrived and three ambulance attendants. All five of them labored to stop the flow of blood. After a half hour of steady pressure they succeeded. They packed up, gave my stepfather a professional glance and determined that he was fine; no need to cart him off to the hospital. They left him propped up in a chair in the kitchen.

As soon as they drove off my stepfather wobbled upright and headed for his recliner to watch the football game. By half-time he was ready for his pie and ice cream. My mother filled his bowl and brought it to him. Handing it over, she noticed blood seeping through the newly applied bandage. She snatched the spoon from my stepfather’s hand.

“You can’t have that now,” she chirped, and grabbed a roll of Bounty.

As each paper towel soaked through she dropped it onto the floor and applied another. In between, she redialed 911. As she continued applying pressure to staunch the flow, my stepfather tried to convince her to let him finish his pie and ice cream while they waited for the ambulance to arrive. She took away his bowl and plopped the pie back into the tin and the ice cream back into the container and sealed them both back into the refrigerator.

At the hospital the paramedics continued to apply pressure to the wound. Eventually the doctor appeared and stitched the whole thing up. Three hours after arriving, my stepfather was released and my mother drove him home.

It was two o’clock in the morning.

“Do you want some pie and ice cream?” he asked my mother.

“After everything I’ve been through today?” she squeaked. “Of course I want some pie and ice cream!”

And between the two of them, they polished off a fifth.

Only the Lonely
Squirrels in the Doohickey