Some Day Your Prince(ss) Will Come 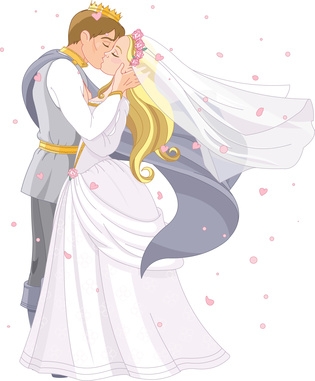 Once upon a time, back in the seventies, there was a television show called The Dating Game. If you never saw it, imagine this:

The stage rotates to reveal three bachelors perched on tall stools, three men with long sideburns and bell bottom pants and button-down shirts with wide cuffs. A partition separates them from the bachelorette, sitting with her knees angled to one side as she reads questions from her carefully crafted list. Questions like: “If you were butter and I was corn, what would you do?” When the list is finished and the commercial is over she picks one of the dreamboats, usually the runt, the one who answered: “I’d slather myself all over you baby, until your kernels popped.” (Yikes.) Their prize? A weekend together in the Cayman Islands.

As they blow a kiss to the camera everyone in the viewing audience knows how this island adventure will end: as soon as the plane lands. Unless this particular odd couple beats the odds and falls in love, and the relationship lasts longer than the relationships of the current crop of reality show contestants.

Today’s version of The Dating Game is The Bachelorette. Here’s the run-down:

The female contestant scores a free wardrobe, a hair stylist, a makeup artist, and twenty-five Prince Charmings chauffeured to her high-heeled manicured feet. They bow, they fawn, they emit mating sounds and stake out their territories in kissing contests.

Then she sends them packing, one by one. Eventually one remains, and that one–if all goes according to the viewing public’s ardent wishes–will labor down onto one knee and propose.

You know better…ye who date. Reality is what happens when the cameras are gone and those all-expense paid getaways are over. You’ve seen that ex-bachelorette scouting for a new soul mate on The Has-Been Pad three months later.

Or worse yet, with no hand to hold.