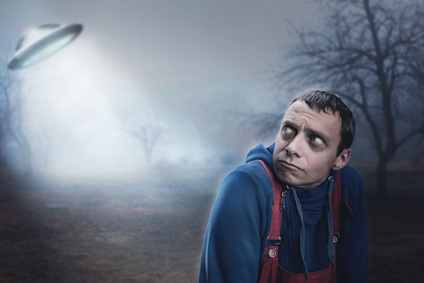 Let’s take a guy, say his name is Kurt, a good solid name for a good solid guy, a guy who gets his hands in the dirt, a farmer let’s say, who knows corn and cows and tractors and the feel of American soil in his palms, let’s take this Kurt, who lives in Small Town USA, beam him up from his corn field, whisk him to California, and set him down in the heart of Silicon Valley, in a city called Mountain View.

But wait, isn’t that illegal?

And that woman standing in line, what’s that thingaby that lines up with her right eyeball in front of her glasses? That, dear boy, is known as Google Glass. She’s scanning the internet as she orders her triple shot mocha with extra whip.

Maybe Kurt takes a stroll down Shoreline Boulevard. He wants to check out the park, built on a dump site. But wait…what’s ahead? What’s that circular contraption motoring down the road? Eight people pedaling a round bicycle. They’re all chatting with each other. Why, it’s a team from Google having a meeting as they bike to the park.

Kurt isn’t so small town that he hasn’t heard of Google. And maybe, by some miracle, he’s allowed onto the campus, which is a short jog off Shoreline, and he’s escorted through one of the buildings. He’ll see more people on Smartphones and laptops and electronic tablets. He’ll see the shelves of free snack foods, and the secretive conversations going on which he won’t be privy to, because those engaged will cease all communication the minute he’s within earshot. He’ll see Google umbrellas (although it never rains over the land of Google), and Google bicycles and Google lounge chairs around a Google lake, and if he uses the restroom he can’t fail to notice the heated toilet seat, which will probably make him jump up and look back with some sort of exclamation, like, “what the…?”

Let’s say that Kurt hops onto a Google bicycle with the assumption that it’s available for a visiting farmer to borrow, and pedals up the peninsula to Palo Alto because he’s fit, this manual laborer, he doesn’t slouch in front of a computer ten hours a day. Outside of Max’s Smoke Shop he ditches the two-wheeler, and strolls up and down University Avenue, past the space-age Apple store with its glass ceiling, past the restaurants that seat people on the sidewalk and serve them teensy-weensy hamburgers that would fit nicely at a child’s tea party. He stops to study a map that he pulls from his back pocket, and hears a voice say, “hello.”

Up he looks, to find he’s standing next to a TV screen mounted on two metal poles on wheels, and on that screen, a friendly face, a young man, smiling. Thinking it’s some sort of recorded program, Kurt says the first thing that pops into his startled brain: “You’re weird.” Then holds his breath, blinking, watching the face to see if it will respond.

And the thing starts rolling toward Kurt, the thing with the talking face, and the two others next to it, so that Kurt is surrounded by robots. And one of those other faces is female, who clucks her tongue. “Don’t be mean to Matt.” And Kurt glances at the third face, another female, who is looking down. Texting, most likely.

Has Kurt landed in the future?

It’s just a typical day in the valley of silicon.

And oh yeah, this.

Fifteen Writing Exercises You Can Do In Fifteen Minutes
When it Comes to ReWriting That Novel, Are You Too Busy To Start?