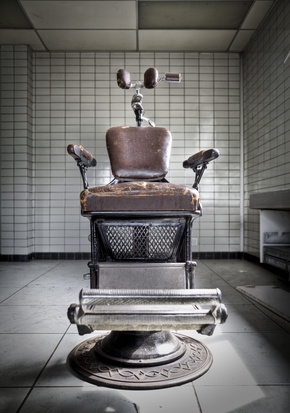 When I sit in the dentist’s chair, that Naugahyde faux recliner that slowly motors backwards until my head is lower than my feet, when I grip the armrests to hold on so I don’t slide into the dentist’s lap, the last thing I want is to realize that the man behind the mask is more anxious than I am.

I don’t want him to peer into my mouth, pause, and say…Uh-oh.

I don’t want him to start prodding my gums with his shiny clawed implements while muttering…Why is this happening?

My instinct at such times is to hoist myself from the chair and make a quick exit past the potted fichus, snatching a couple of free toothbrushes from the basket on the counter on the way out the door.

But instead I cling to the armrests, under that bright light, sweating.

I try to smile encouragingly, but my lips stick to my teeth.

I shrink as he leans in, sweating behind those giant plastic goggles. And just what are those goggles protecting him from? I don’t want to know.

This is where visualization comes in handy. I close my eyes. I visualize myself running down the beach in slow motion, twirling in circles with arms outstretched to the heavens, drinking in the sunlight like gentle rain. I try to transport myself to a place other than the upside-down chair and pray that when I come back, when the dentist is done with his prodding and worrying and his running dialogue about the tooth that has twisted ninety degrees—or whatever other paranormal phenomenon he’s discovered in my mouth—I pray that he’ll motor me upright and lower his mask, and with that relieved look on his face, the look that hostages get when they’re released, he’ll say…you’re good to go!

Does any dentist say that, ever?

It’s not that I’m afraid of dentists.

I’m afraid of what they’ll find.

I’m afraid of being imprisoned upside-down in that motorized chair and bleeding profusely. Not that it’s ever happened. But that’s the irrational fear I harbor.

I don’t even mind the needle. I squeeze my eyes shut and focus on my toes.

I just don’t like the murmuring that goes on behind the dentist’s mask. All that murmuring! What’s he saying? Is something wrong?

Diane, we need to…

Always “we.” As if I have any part in the situation other than holding my mouth in an unnatural position for forty-five minutes, resisting the urge to chomp through his meaty fingers.

We need to saw through this area here, and drill down to the jaw bone and extract some…

Okay, I’ve never heard that phrase. But I fear it.

Like most people on the planet, I don’t enjoy going to the dentist.

I’ve learned that if I hover over the basket of freebies long enough the dentist will give them all to me. As much as I can carry. So I stuff my purse, my pockets, and take two fistfuls and he needs to open the door for me, follow me to my car. Then there’s the matter of the key. The key is at the bottom of my purse. He rummages around in my purse to unearth it and…well, here’s the best part about going to the dentist. He pulls out a tampon. Maybe accidentally sets off the pepper spray in his face.

Okay, none of that actually happens.

But I dream about it, imprisoned in that chair under the bright light, my jaw permanently locked in an open position.  And nine times out of ten, because I brush after every meal and floss every night, all I suffer is a little scraping and a good motorized polish with a gritty substance that tastes like warm Orange Julius.

Not bad at all.