A Night in the Sleep Clinic, Part 3 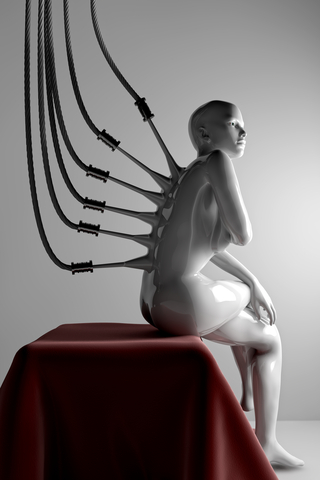 I gave up attempting to sleep, and swung my legs over the edge of the bed and sat up. Johnny appeared in the room in a flash, still wearing the white lab coat, still looking like a sad-sack, only sadder. The room still looked like a mock hotel suite minus the window and the suite, and I still had eighteen electrodes and gobs of paste and strips of tape plastered to my face, scalp, chest and legs.

“I can’t sleep,” I told Johnny and he said, “Actually, you did. A little. Those electrodes on your head, remember?”

His voice was soft, soothing. Or maybe it sounded that way. Maybe I wanted to hear a soft soothing voice at three o’clock in the morning in a nondescript building that housed a sleep clinic.

“Well, at least I have someone to talk to,” I said, and he might have smiled.  I asked, “Is it boring, watching people sleep all night?”

“Oh, you’d be surprised. I have stories you could wrap around the moon.” The adventures of Johnny-something, sleep technician. “Sometimes I have to call the police,” he said.

“Oh, you’d be surprised.” He looked smug, standing in the dark with the light from the hallway spilling in. He rocked back on his heels, holding on to those stories. I was too tired to dig.

I slid my legs back under the sheet. “You must have sleep problems, working the night shift.”

He deflated quickly. “You’re right. I only get about three hours.”

Johnny-something, insomniac. Running a clinic for insomniacs. No wonder he looked sad.

He asked, “Do you want to keep going?” and I figured why not, I was hooked up, three o’clock had come and gone and Johnny-something was decent company, even if he was in the next room watching me on a monitor. So I white-knuckled it through another few hours of fractured sleep, and at five-thirty he was back in the room, peeling off all eighteen wires. It took about five minutes to get them all off. While he hung the wires back on the hooks on the wall I asked, “Can you tell what’s keeping me awake?”

Johnny shook his head. “We’re not supposed to. The doctors don’t like it. Once I told a woman she had sleep apnea and she screamed hysterically. You’d of thought I was murdering her.” He was chewing the cinnamon gum again. “There’s nine hundred pages to evaluate,” he said, “thirty seconds of recordings on each page. You won’t hear anything for a couple of weeks.” He walked me out the back door, my hair matted with glue, and there in the gray morning light he sighed and confessed that I had signs of sleep apnea.

I looked him in the eyes. They were tight. I wanted to ask more, but he’d said too much already. I sent a silent thank-you to whoever had sent Johnny to watch over me.

“That’s what I figured,” I said, and he perked up.

“I’ll bet they schedule you for another night in the clinic,” he said, “with a CPAP machine.”

I kept my gaze steady, imagining the sucking sounds that come from breathing through a mask all night. We both stood in silence and then he stepped back into the shadows of the clinic, and I got in my car and drove home.

I’d play dumb when the doctor called with the results.