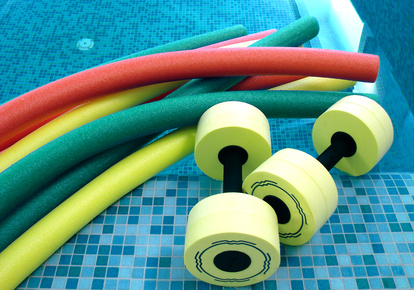 On Mondays, Wednesdays and Fridays the water buffalos descend upon the pool where I swim.

“Water buffalos” is the lifeguard’s affectionate term for the group of older women who wear pink baseball caps and long-sleeved body gloves over their one-piece bottom-heavy swimsuits. They gingerly make their way down the ladder into the deepest part of the shallow end as a  younger, fit woman cranks up a portable radio, and they all groove to the music.

That is to say they engage in water aerobics, which is so un-aerobic that their hearts probably don’t even notice.

The instructor starts off with some easy stretches that the buffalos take a stab at until someone comes up with a story about the crockpot and the husband, or the husband who happens to be a crockpot; I’m never quite close enough to hear more than snatches of the conversation. The instructor, meanwhile, is sprinting back and forth along the edge of the pool to Gene Kelly’s rendition of Singing in the Rain, shouting out encouragement. One buffalo tries a half-hearted jog in place, and the others drift down to the opposite end talking about Katy Couric and Dr. Phil; I’m not entirely certain if the two are an item, but they are definitely worth a jolly discussion in the deep part of the shallow end of the city pool. The instructor moves on to jumping jacks as the radio blares go, daddy, go go go. The buffalos wave their arms in the air while underwater their feet in rubber shoes kick from side to side in slow motion. I swim five more laps and the buffalos are hard at work firming up their underarm flab, swinging Styrofoam noodles from side to side. Another ten laps and they’re hefting Styrofoam dumbbells in the vicinity of their heads and swapping stories about arthritic joints.

I think the buffalos are onto something here. This is a much healthier social scene than Facebook. While hundreds of thousands are slumped in front of their laptops or over their IPhones typing up itinerary for their friends to view, these old gals are hefting Styrofoam and swapping gossip. Granted, their jaws are getting most of the exercise, but at least they’re together, in the flesh (sometimes more than I care to see), in fifty degree weather, which, for a Californian, is rugged weather.

The buffalo gals are hardy souls. They strap on their suits, their hats and their rubber shoes, and commit to engaging with their fellow buffalos.