How One Obscenely Large Crow Turned Me Into A Vegan Overnight 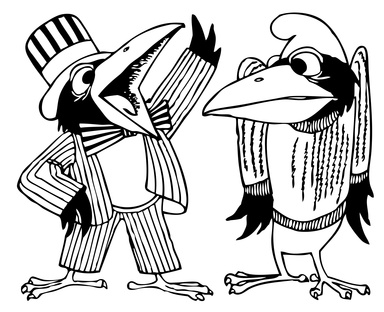 I can name a dozen reasons why I decided to choose a whole-foods lifestyle. I’ve listed ten, below. But there’s only one thing that convinced me to make the switch from carnivore to herbivore overnight.

Try…a crow who smokes cigars and struts around in a pinstripe suit and hat.

That crow was in my backyard, dining on a rat.

At first, I didn’t realize it was a rat. I just saw Mr. Crow machine-gunning something with his beak, and that something leaping into the air trying to get away. I thought, My God, it’s eating a squirrel! I marched outside to shoo the crow away, and skidded to a stop.

If there’s one thing I dislike more than crows, it’s rats. And that pecked pecker was definitely one big honkin’ rat.

This is nature in progress, I told myself. This is an example of dining out on the food chain.

But the rat was STILL ALIVE! (And there may have been some entrails involved.)

I spun around and fled to my cottage and closed the blinds and shouted to the empty room, “That’s it! I’m not eating meat anymore.”

I had already given up diary (lactose intolerance) and gluten (gluten intolerance) so officially, I was announcing my veganism to the world (barnyard animal intolerance). I’ll admit, it took another month for me to get into the swing of eating the whole-foods way. But now, two weeks in, I can honestly say…hmm.

And…hey, I’ve got my pep back! I’m not snoozing at my desk at three-o’clock in the afternoon.

So, for all of you who are curious about why someone would swear off meat and dairy, here are the top ten reasons why I chose to go vegan.

2. The butcher at Safeway. When I went shopping for ground turkey, he appeared, with bloody fingerprints on his white lab coat. Now, I have it on good authority that it wasn’t blood; it was the red dye butchers use to make meat look…bloodier. Still, it looked like blood, and that’s one thing I didn’t need to eyeball when planning my dinner menu.

3. I’d rather get my protein from a living organism than a dead one. Nuts grow into trees. Seeds grow into plants. Even the lowly potato keeps sprouting things after it’s harvested. Dead animals? Dead meat. That energy is kaput. Oh sure, a chicken’s body will dash around for awhile after its head is removed. But by the time that carcass is plucked and packaged and shipped and cooked and served on your mother’s best china, it’s dead, with a trace of lingering adrenaline the poor bird released right before it was whacked. I’m manufacturing plenty of adrenaline on my own thank you very much; I don’t need to imbibe more.

4. What do cows eat? Grain. What do chickens and turkeys eat? Seeds. I’m skipping the middleman and eating direct.

6. I can buy the bulk of my dietary needs outdoors, at the Farmer’s Market. No fluorescent lights. No canned music from the 80’s. No employees who don’t have a clue about the food they’re stocking. I’ve sung my praises of the outer aisles here.

8. I sleep better. Can’t explain that one, but I’m eternally grateful.

9. I feel cleaner inside. My digestive system is happier. It doesn’t feel like I’m churning lard through my guts.

And last but not least…

10. When Vegans pass gas, it doesn’t stink. It says so, right in the literature, and I’m standing by it. If you happen to be standing by, you’ll notice: my farts don’t stink. This alone makes the world a better place.

Want to learn more about eating the whole-foods way? I recommend the following books:

The Forks Over Knives Plan by Alona Pulde, MD and Matthew Lederman, MD

My Beef with Meat by Rip Esselstyn