How to Change the Rules in the Game of Anxiety 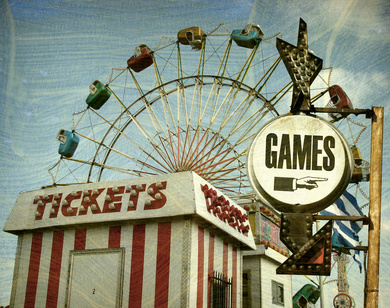 This week, I played the game of anxiety in the circus of my mind.

This is considered round one.

You may continue playing rounds, choosing different future events to obsessively worry about. You’ve won the game when you become a nervous wreck.

I realized there’s a better game.

Visualize the best possible outcome of events and fixate on them, running the loop in your mind until your body reacts with a smile and a bounce to your stride and a wide-open grateful heart, and then fixate on how wonderful you feel.

It just has different playing pieces.

Since anxiety is a game manufactured in the mind, it occurred to me: why not set the mind to visualizing happy tidings rather than worrisome thoughts?

Oh, you can’t fool the mind?

That’s what I thought. Until I caught on to the fact: my mind isn’t all that bright.

I’m sorry, but my mind doesn’t know the difference between what’s real and what’s nothing more than whatever squirrelly thought I’m feeding it. Don’t believe me? Here’s a test:

See? Your mind was duped into thinking you were really eating a lemon, and sent that message to your taste buds.

Granted, it’s not my mind’s fault that it’s none too bright. After all, it’s buried under a lot of grey matter without eyes to see or ears to hear. It relies on me to give it the real McCoy.

It’s my fault for feeding it a bunch of malarky.

Dave had surgery this week. I volunteered to be nurse for the day.  Had someone else volunteered me for the task, I would have questioned their sanity. Sending a hypochondriac to be a Florence Nightingale is a sure sign of Squirrels in the Doohickey.

But I love the guy, so I stepped up to the plate.

I worried endlessly, peppering my thoughts with “what if?” scenarios. What if the surgery goes badly? What if he gets sick from the anesthesia? What if he starts bleeding? What if he gets an infection and I have to take him back to the hospital? What if the surgery goes badly, he gets sick, he gets an infection, his incisions bleed, and I keel over? That was my real concern; that I wouldn’t remain upright through the whole ordeal. I was afraid I wouldn’t be able to handle whatever happened, and Dave would end up taking ME to the hospital.

I worked myself into a proper anxiety attack. I fretted. I ruminated. I lost three pounds.

I WON THE ANXIETY GAME!

Then the moment arrived: the changing of the guard.

Carolyn, who drove him to and from the hospital (definitely not a job for a hypochondriac), brought him home, and I showed up, ready to take over.

I took a deep breath.

I cautiously called his name, and stepped inside.

Dave was peeling off his shirt. He turned toward me.

I avoided looking at his gauze bandages. I wondered about all that rusty-colored stuff on his skin. Blood? Antiseptic? Please be antiseptic.

I braced myself. This is it.

“I saved my gallstones,” he said. “They’re in a bottle on the kitchen floor. Wanna see?”

ARE YOU KIDDING ME?

I almost cried in relief.

“Um…maybe another time. How are you?”

“Good! I don’t feel any worse than I do on Monday mornings getting up for work.”

I gave him a sponge bath, a shoulder massage, and some energy treatments, opened a package of Saltines for him to eat, and hung around until he got into bed. Then I watched over him from the Jesus Chair.

I was able to do this because, well, the visualization I had conjured up was much worse than the reality.

And before arriving, on the verge of panic, I grasped the epiphany that anxiety is a mind game. The true winner games the system.

Since my mind does an ace job reacting to my fearful images, why not choose images that tap into feel-good chemicals, instead of all that adrenaline and cortisol? I told myself I can just as easily visualize lying on my sky blue blanket on a vast green lawn, a cool breeze wafting by, the faint sound of a bi-plane motoring overhead, someone mowing their lawn in the distance, a father, perhaps—nice, safe, comforting, neighborhood sounds.

Then, instead of worrying about whether I would be okay, I could focus on making sure he was okay.

Now, about those gallstones…

I did take a peak. Then I left Dave with a small bag of cherry pits from my lunch, so he could show them to the guys at the office. “Look how big my stones were!

The Mini Refrigerator that Turned into a Giant Headache: Part 3
Rewriting: My non-advice