The Mini Refrigerator that Turned into a Giant Headache: Part 3 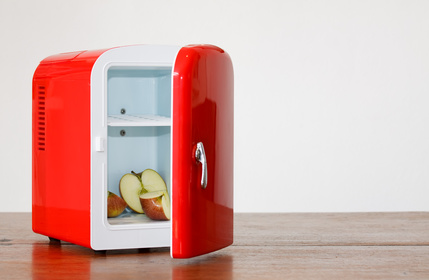 If you’re not up to speed, the whole lovely affair started here. Go ahead and read it. I’ll wait.

To recap: After my thirteen-year-old mini refrigerator gave its last gasp, I needed to get a new one. Turns out they don’t make mini refrigerators the way they used to. That’s what the not-so-mini refrigerator repairman told me when he came to examine the faulty seal on the Magic Chef unit I had purchased after returning the other two appliances that were not up to par.

“Think about it,” he said. “Companies don’t make money unless a customer is buying their product. So they manufacture refrigerators to last as long as the warranty. Three years. Tops. Then you’ll buy a new one.”

I recalled the tennis shoes I had purchased that had a six-month guarantee. My environmental hackles rose.

The repairman, a genial balding fellow with glasses, checked the seal. “Oh, this is normal,” he said, pulling the seal completely away from the door. “It’s supposed to peel away. See? Then it tucks back in nicely.”

“Uh…doesn’t that mean air is getting in?” The top corner still gapped.

He ignored the question. Instead, he told me about the interesting customers he’d encountered.

There was the guy who worked as a crane operator, who helped some NASA scientists with an experiment by dropping things from on high to see if the objects would remain intact. This was part of the design process for the rover. Unfortunately, everything shattered. One day, the crane operator leaped off his crane, landing with flexed knees, and said, “Ah ha! It needs knees!” And he became forever famous (at least in the world of NASA) for the brilliant idea of flexible legs on the rover.

There was the guy who was shot in the head, the bullet lodged in such a precarious position that operating on it would have killed him. So the surgeon had the brilliant idea of putting the guy in NASA’s (again?) centrifuge, which whirled the poor fellow around at high speed, magically dislodging the bullet from the same hole it went in.

“I love meeting interesting people,” the repairman said, and looked at me as if waiting to hear what brilliant idea I’d contributed to humankind.

I thanked him for his time, and sent the jolly man packing.

And before you ask, YES, he did tell me those stories, because this is the sort of repairman the universe LOVES to send me. I interpret this as either:

I wracked my brain for a brilliant idea on how to get the refrigerator back into its box, back into my car, and back into the store without sending my back into another spasm.

The plan I came up with was this: buy yet another fridge, and store The Magic Chef in the garage temporarily, JUST IN CASE.

As luck would have it, Dave had a buddy at work who had just purchased a mini refrigerator on Amazon. The guy had it delivered straight to the office, and he set it up next to his desk for bottled drinks. It hummed. It purred. It was so quiet, according to Dave, that you wouldn’t know it was on.

I gave Dave my mini thermometer and instructed him to stick it in the fridge and monitor it. After a week, the verdict was in: the temp never budged above 35 degrees.

Long story short, I rushed to Target to buy it. As it turned out, it was the EXACT SAME REFRIGERATOR I first purchased before all this madness began, the one that looked like it was made for Barbie-doll food.

One of the shelves, I discovered, could be moved up or down to accommodate adult-sized food.

I plugged it in. I set my thermometer on the top shelf. Then the bottom. Then the middle. Then the door. I nudged the temperature control a smidgen up and down and up and down until it was just right, and then I loaded my food onto the shelves.

I am here to report: The refrigerator doesn’t purr.

I’m learning to embrace it.

If Life is What You Make it, Make it Matter
How to Change the Rules in the Game of Anxiety