Lions and Doggies and Me Oh My 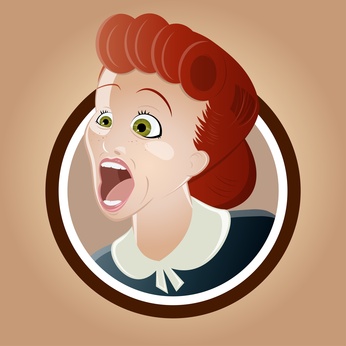 For three months in winter, after a lay off and with no foreseeable income in my immediate future, I grab my father’s generous offer and hole up with him, my stepmother, their rambunctious dog and a parakeet that sings the tequila sunrise song repeatedly until someone yells “shut up!” To clear my head, I bundle up and take long walks in the Sierra. This is the country of tall pines and air that I can bite and snow—lots of snow—and dogs that lunge and growl and bare their teeth as I pass by.

I encounter what appears to be just such a dog on the final lap of my hike one morning, the moment I turn onto my father’s street. I see it crouching under one of those tall pines halfway between me and my father’s house.  It’s large. It’s yellow. If my reptilian brain was hazarding a guess—and it is—this large yellow doggie just might possibly be a mountain lion.

I mentally review what to do when confronted with a Big Cat.

First off, if a mountain lion decides it wants to eat you, you’re not going to know in advance. It won’t saunter in front of you and face off. These are ambush animals. They hide in the brush waiting for their next meal, and attack quickly. This animal isn’t hiding. It’s boldly waiting to devour me. So, Rule Number One: never walk alone.

If you are walking alone, don’t bend down or limp. You don’t want to look like an easy target.

I puff out my chest and stand tall.

Rule Number Two: When you walk with a group, don’t peel off, for all the reasons cited in Rule Number One.

Rule Number Three: If you are attacked, fight back. Gouge it in the eye with your thumb or finger. Yech! Slit its throat if you have a knife handy. I don’t. Bash it over the head if you have something really heavy and not just a stick.

I scan the vicinity. There’s a good-sized twig in the underbrush, but I’d have to bend down to pick it up.

I make a mental note to buy pepper spray.

Rule Number Four: If any member of your group peels off and bends down and gets attacked, refer to Rule Number Three.

Rule Number Five: If by some miracle a mountain lion happens to wander across your path and takes the time to stare you down… Yes! Yes! …make yourself look really big.

Don’t run away, especially if you limp. Hopefully this will make it go away. If instead it decides to sail twenty feet and sink its jaws into your face—which is what they do, they go for the head—give it an arm instead.

How about the finger?

Then refer to Rule Number Three.

Thankfully, a man lumbers out of one of the houses. He looks up the road, sees me waving my arms, and waves back. Then he heads straight for the lion. Watch out! The animal springs into action.

It wags its tail.

It offers a friendly bark.

Suddenly everything is clear.

I drop my arms and lower my head and wait for the man and his dog to disappear. Then I slouch onward, wondering if all my fears are nothing more than ancient arthritic golden retrievers.

A Fine Day
A Bed in a Box