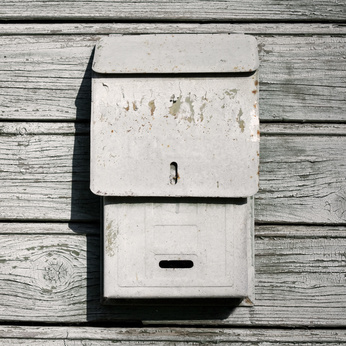 Back in the day, mailmen carried letters from loved ones, envelopes bearing the slanted blue penmanship of a mother, a lover, a soldier, a childhood friend. That letter traveled, from the curled meaty edge of the writer’s palm to the inner confines of the envelope, passing from mailman to mailbox or handed over with a greeting. Good morning, Mrs. Whitney, I’ve got the letter you were waiting for, here in my pouch.

Bert remembers those days as he drinks coffee at his metal kitchen table, as he goes out into the dark morning hours, drives to the post office, and stands sorting the mail, trading quips about the weather, the latest political scandal, the collapse of the economy—important stuff. And then he fills his truck with the stuff that is unimportant: the bills, the circulars, the empty promises from political candidates. It’s a fine day when he sorts a handwritten letter, something he pauses to run his dry palm over. Ah, this will bring a smile to Mrs. Whitney’s morning.

And every day he whistles. He whistles when he swings out of his truck and hefts the leather pouch onto his shoulder and walks his route instead of driving. He whistles because if he can’t bring the news they long for, at least he can deliver a moment of hope, of joy.

“Good morning,” he hollers, lifting his heavy arm and flicking a wave. His bouncy stride says: all is well. “Good morning to you!” Someone cares, he is saying. “How’s that rheumatism, Mrs. Whitney?” Mrs. Whitney is twisted over, waiting outside her door, making the effort to stand.

“No letters,” he says, knowing it’s not a letter that brings her out of doors, and it’s not the weather, “but isn’t it a fine, fine day?”

A Reason to Smile
Lions and Doggies and Me Oh My