Making Sense of it All 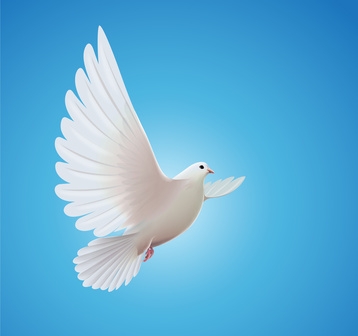 A friend, a co-worker, died. And then I dreamt about pies.

I tried to make sense of them both: the dying and the dreaming.

In the dream, an elegant woman wafted into the bookstore where I worked and ordered a twelve-inch apple pie to be mailed to her sister in Alabama. I thought, how the heck am I going to mail a pie all the way from California to Alabama in one piece? I mean, pies are delicate concoctions of pastry. And the boxes we had were those flimsy pink pie boxes with the cellophane window. But she wanted a pie, and we just happened to have apple pies.

I did my best, I really did. I slid that pie nice and gentle into a pink box and I settled the pink box into a sturdier cardboard box and I stuffed hand-towels in the empty spaces and carefully, so carefully, started to close the lid, and the pie crumbled. The center collapsed and the crust clung to the sides of the tin and I told the woman she should buy a book instead.

But she wanted a pie.

So I slid another pie into another pink box and so on and so forth with the same end result…a box full of glazed pie pieces.

I knew I was going to have to pay for those broken pies. I knew this woman wasn’t about to change her mind. I stood in a room full of pies and empty boxes and woke up feeling anxious.

What was that all about?

I went back to sleep.

At the register I rang up the pies at the wrong price. Now I had to issue credit, but I botched that too.

I woke up feeling anxious.

Went back to sleep.

When I finally shook myself fully awake I tried to make sense of it all.

According to sleep experts, we consolidate information during REM sleep. We sort and process events and work through emotions and file them away in a memory bank. I had written about pie and ice cream. I was probably feeling anxious about the whole mortality thing because my friend had died.

She collapsed at home from an embolism in her lungs. For two weeks she lay in a coma in ICU, having what I suspect was an out-of-body vacation of a lifetime, of eternity; the kind you don’t want to return from, so you don’t.

And then she let go.

But the rest of us, earthbound—we hadn’t let go. Her death didn’t make sense to us.

While she was in a coma I saw a dove perched in the fig tree outside my window. I had never seen a dove in that tree. I wondered if it was my friend sending a message.

The evening she died, I was eating a dinner salad and felt a tremor ripple through me and thought she’s passed on. Was this a random wrinkle in my nervous system? I called the hospital, and the nurse in ICU confessed in a low hesitant voice that my friend was gone.

What? No! I just saw her two weeks ago, smiling at me with the immense joy of a baby. I just saw her…she was standing next to my desk, rocking back and forth on a squeaky board.

Part of the brain is assigned to find meaning in death, in life, in dreams. There’s comfort in meaning. It’s soothing, it’s healing. Another part of the brain observes without judgment. People die, pies crumble, we botch things up. Everything is a five, or a six, or an eight—it doesn’t matter. There’s no right or wrong or good or bad; it is what it is. I like to spend time in that part; see the big picture.

But I like to spend time in the other part, too, the part that believes a dove is sending a message from a dear friend: Everything is okey-dokey. Tell the others.

In grieving, the heart wrenches open. And maybe, ultimately, that’s the sense of it all: to remind us to love, even our failings.

You Gotta Work For It
Writing The Great American Novel