You Gotta Work For It 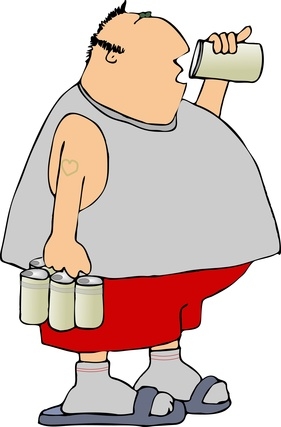 George shuffles into a convenience store and asks the middle-aged woman behind the counter for a six-pack. The clerk, gnawing on a toothpick, head down reading People magazine, points to the refrigerator case stocked with beer. George says no, he wants a six-pack of muscles and she looks at him, the first time in all the times he’s been in the store, and looks at his gut. She moves the toothpick around in her mouth without moving her hands and then reaches up and takes it out and says, we don’t have no abdominal six-packs. You gotta exercise for that. Do those scrunchy things.

And he says, exercise? You mean dumbbells? Running in place? That sort of thing? Her eyes, he notices, are green.

And she says, no, you gotta get down on your back and do those scrunchy things. You gotta squeeze your middle into a tight ball and hold it like that, maybe bounce up and down like that, ’til your whole belly is one tight cramp. And then when it’s cramped like that you’re supposed to breathe. And that’s what makes them six-packs.

She pops the toothpick in her mouth and goes back to reading.

George stands there staring at her for a good long minute. He wonders what time her shift ends, and if she’ll notice him still standing there. He sighs. Scratches his stomach. After awhile, he shuffles to the refrigerator case, pays for the beer. She hands him the change without looking up.

Squirrels in the Doohickey
Making Sense of it All