The Gluteus Maximus Takes a Snooze 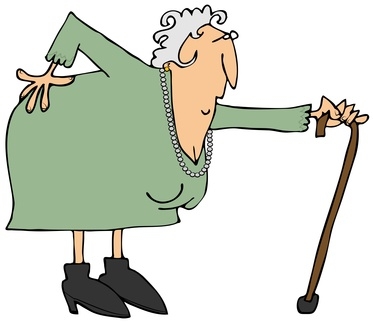 Three months ago I had a cortisone shot in my right hip for bursitis, and the pain disappeared. For three glorious months I hiked, swam, and did one-legged squats as instructed by my physical therapist.

And then the shot wore off.

I emailed my doctor: The cortisone stopped working. The pain is worse now than it was before the shot. I can hardly walk two blocks. I have sharp pains shooting down my leg. What should I do?

The doctor emailed back: Schedule another shot.

I was in no hurry to get another needle jabbed into my bursa. Instead…I would use a cane.

I would drive to the drug store and buy a black cane, the kind that creepy people use in old movies. I would use that cane to hobble from my car to my job, and then to thump up and down the stairs all day. If necessary, I would crawl on my hands and knees.

And then…I would go to Costco.

I would go to Costco and buy toilet paper.

One-hundred and twenty rolls of super soft toilet tissue in a package that weighs three-quarters of my body weight. But to get to it, I would have to walk to the very back corner of the mammoth warehouse.

And I would leave the cane in the car.

And not use a cart.

Except for the last part. I left the condominium-sized package on the belt and limped to my car, muttering.

I scheduled an appointment with a physical therapist.  “You have no butt, woman,” she said. “And I don’t mean that in a good way.” The muscles had atrophied—a fancy word for shrank. But only on the right side. The left cheek was Mount Olympus. The right…Death Valley. The gluteus maximus and the gluteus medius had decided to take a siesta.

Imagine a guy flipping burgers at McDonalds. The flipper takes a three month nap, and leaves all the flipping to other employees who already have their hands full washing lettuce and slicing tomatoes and unscrewing lids on pickle jars and whipping up McCafe Frappes. These other workers are forced to take up the slack, flipping millions of burgers every day, and they’re raging.

That’s what was happening on the right side of my rump. The piriformis and the psoas and the IT band were doing the work that the glute-brothers should have been doing, and they were doing it poorly.

The physical therapist sent me to an orthopedic specialist. The specialist put me through a series of muscle tests and announced that I had lazy glutes.

“Those one-legged squats that you were told to do were just too hard! The muscles aren’t equipped to handle the job!”

Imagine asking the burger flipper to snap to because he has thirty minutes to make Coq au Vin for the President and five hundred guests. Can’t be done!

So the specialist gave me a series of easy exercises to do. I like easy. My lazy muscles like easy. This is like telling the burger flipper to 1: slide the spatula under the patty, and 2: flip it. Ten times.

In addition, she told me to squeeze my right glute with every heel strike.

And use the cane.

I drove to work. I got out of the car. I unearthed the cane from my trunk. I walked the three blocks as instructed, and I looked like an old lady squeezing a lemon between her thighs while holding back a fart.

I’ve scheduled another cortisone shot for next Friday.