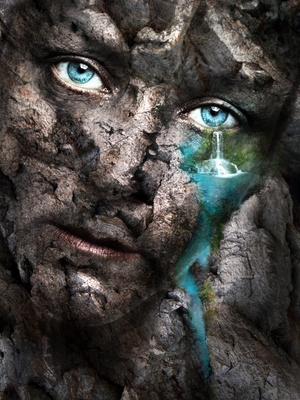 I’m sitting at a picnic table in the park mindfully eating a turkey sandwich while soaking up the peace, when across the lawn a toddler decides to pitch a fit. This is the kind of fit that kids pitch when they’re being dragged from something fun to something not-so-fun…like nap time. But this kid isn’t being dragged. She’s doing the dragging, or attempting to; she’s pulling at what appears to be a mound of black clothing.

I begin to wonder if there’s trouble afoot, if maybe I should stop mindfully eating and offer some assistance. But the mound slowly rises and the child stops crying and happily launches herself onto the back of what I now see is a woman. She staggers upright. She maneuvers a baby carriage around and begins a slow trudge along the perimeter of the park, one child in the carriage, the other swinging from her neck. She looks like earth itself, as if the earth had gathered itself up and risen in the form of a woman.

This determined earth mother slogs onward until her legs buckle. She sinks to her knees. She tries to disengage the firm grasp from her throat, but the kid refuses to let go. Exhausted, the woman sits in a puddle of her own clothing and tries to reason with the child, but the child wants none of it. The toddler flings herself to the ground, sucks in a park-load of air and lets it out in one continuous howl.

I want to storm over and talk some sense into this howler. Give my two cents worth. Point out that there aren’t many people on this planet other than our parents—and a rare parent at that—willing to lug our sorry self around. You should be grateful, I want to say. Now quit your whining!

That’s believing that I  have control and responsibility over everything and everybody, and that I am the only human in the vicinity who can preserve the peace and save the day—which is number 9 on the list of thinking distortions.

Let them work it out, I tell myself.

The woman continues to sit and talk quietly. I’m amazed at her patience; although for all I know she might be saying, “If you don’t shut the f— up I’m going to tell Santa to take away all of your toys and give them to your cousin Jimmy. That’s right, Cousin Jimmy, who stuck your head in the toilet last Christmas.”

Maybe that’s exactly what she’s saying, because the child ramps up the volume, splitting the eardrums of everyone within hearing distance. People fold their newspapers, repack their lunches, grab their picnic blankets, awaken from a drunken snore, and lumber, stride, rush from the park to their offices, their cars, their street corners.

I mindfully finish eating my sandwich, waiting to see how this age-old battle will play out.

Eventually the mother and child come to an agreement. The howling stops. The earth gathers itself up again and the child gleefully launches herself on.

This is the weight of parenting, I think.

Or, for ten bucks an hour…babysitting.

Bugged
I Wanted to Be Something Grand