Government Shutdown? Santa to the Rescue 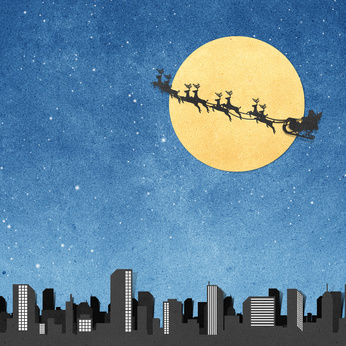 You better watch out when Santa takes action. And one October night in 2013, that’s exactly what he did.

Santa was fed up with the politicians and their political bluster, claiming to know what every American citizen wanted. He was fed up with their shenanigans, swinging the country toward the fiscal cliff and then shutting the government down. Santa usually waited until Halloween to fatten himself up, but in 2013 he started early. He shook the moth balls from his red suit and polished his big black boots and practiced his ho ho hos and called the reindeers in from their reindeer games and notified the media, warning them that Christmas was coming early this year, and he asked the FAA to clear the skies, and then, skipping his customary whistle, he shouted “Now Dasher, Now Dancer…” but before he could finish, the reindeer surged upwards because they were fed up too.

Santa plucked every politician from their beds and tossed them into the sleigh. He even roused Obama, letting him ride shotgun. And he carried them through the skies, the whole lot of them bickering and pushing and shoving and blaming and demanding to be let out. He dropped the Republicans in the blue states, and the Democrats in the red states, and he shoved Obama down Donald Trump’s chimney.

And finally, he buzzed low over the museums and national parks, so low that his reindeer’s hooves clipped the barricades and knocked them all down. A father and son, camping in a parking lot outside the Grand Canyon instead of embarking on a three-week rafting vacation as planned, watched slack-jawed as Santa tipped a gloved hand in their direction before zooming away. They heard a hearty ho ho ho and then the faint jingle of bells and then nothing but their own astonished breathing.

The next day the U.S. postal service delivered checks to the mailboxes of every furloughed worker, money that would have paid the salaries of every politican. And by the time those politicians returned to Capitol Hill via bus and taxi and train, some of them thumbing a ride, one of them walking the whole way in shoes that pinched tight, they discovered that their beloved aisle was gone. The chairs in both chambers had been uprooted and rearranged into two giant circles. In the center of one circle was a pile of every can that had been kicked down the road. And in the center of the other: a mound of reindeer droppings.

Music is My Mission
Eliminate Regrets in One Easy Step