A subscriber to this blog encouraged her fellow bloggers to repost the first piece they ever posted. (Yeah, you, Sarah Brentyn.) So without further ado, here is my first ever post, from way back in April of 2013. And for those of you who’ve followed this blog since its inception, you deserve a medal. (Yeah, you, auntie Joan.) 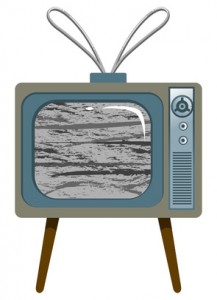 We were doing fine, dwelling in the same living space, enjoying the same music. A little country, a little classical, a whole lot of evening jazz. We were relaxing to Beethoven and cooling off to Chris Botti and singing along with Blake Shelton and then, when I wandered over to the Big Band station, the radio turned itself off. A little Artie Shaw or Benny Goodman….click. Every time.

When I first hooked up the television I had a smorgasbord of stations. I was hooked. It saw that I was hooked. It knew that I could be spending my time on more productive endeavors, like rewriting my novel. So it started eliminating the stations one by one until I was left with one station.

One station that aired the original Star Trek series and the old Dick Van Dyke show.

Night after night I watched Bones and Spock and Kirk “…boldly go where no man has gone before,” and then I watched Dick come home from the office in his suit and tie, tumble over the hassock and get the wind knocked out of him.

I called the people who are dedicated to fixing these problems, and a man wearing a hard hat drove up in a white van.

Okay…this is dysfunctional thinking. This is the kind of logic Bones might manufacture. Luckily, I had a Spock-like rational self who pointed out that the sensible thing to do was replace the radio and deal with the faulty wiring. Luckier still, I had a wise self, a Zen-like Captain Kirk, who suggested that the radio and TV were doing me a favor. They were telling me to spend less time tuning into them, and more time tuning into myself.

I settled down and straightened up and focused on my breathing and two minutes later I was channel-surfing in my head, my thoughts scampering around like squirrels in a doohickey, and I found myself wondering, what’s next? Will the blender regurgitate my breakfast smoothie? Will the vacuum cleaner suck up my faux fur slippers?

The Day I Said Yes to Everything
Discouraged? These three magic words will make you feel better