The Day I Said Yes to Everything 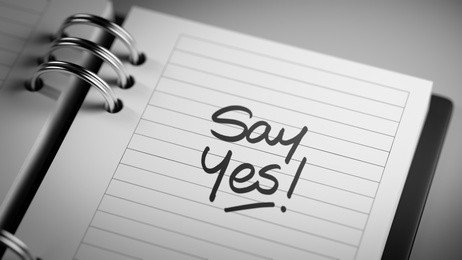 Saturday morning started like any other; the radio popped on to classical music, forty-five minutes later I rolled out of bed, brushed my teeth, meditated, ate my breakfast bowl of oats and granola and ground flax seeds and sliced bananas and strawberries topped with oat milk…

I won’t bore you with the details.

The only difference between this Saturday and any other is that I pledged to say “yes” to everything.

While preparing lunch in the kitchen…

“The outside lamp isn’t working,” my landlady said, suddenly appearing at the end of the counter. “It might be the timer. I think it needs to be reset. Would you—?”

“Maybe I could stand over your shoulder and read the instructions out loud.”

“I need my glasses.”

I turned on the television. Two men were talking about turf grass.

They stood on a swath of lawn facing each other wearing nondescript clothes. In fact, both men were nondescript; if I had to pick them out of a line-up, and all ten men were wearing the same beige pants and aviator sunglasses, I wouldn’t be able to single out those two. But there they stood, face to face at a golf club, discussing turf grass.

“What are the different types of grasses?” said the interviewer, the man on the left.

The remote sat next to my hand. I could have changed the station. Due to the minuscule size of my cottage, I could have reached over and turned the television off. But I was transfixed. Two men discussing turf grass was so compelling, I lost all awareness of the food I was shoveling into my mouth.

“We should get our clubs and test this grass,” the interviewer said, and both men strode purposefully toward the camera.

The next shot, they were facing each other, on another swath of lawn, without their clubs.

“Which grasses are best for homeowners?” said the man on the left.

“You’ve got your Fescues and you’ve got your Bermudas,” on and on the man on the right droned. “For shade, you’ll want your St. Augustine.” His voice never rose or dipped. “In the south, you’ll want…” on and on, and I don’t know if it was the unfortunate way his pants were pleated, or how he stood with his right leg in front of his left, but he appeared to be—how can I phrase this delicately—extremely passionate about turf grass. It was hard not to notice his passion. It distracted me from the fascinating conversation, until the interviewer suggested that they get their clubs and try out the grass, and both men strode purposefully toward the camera.

The next shot, they were facing each other, on another swath, discussing bugs. “How do you know which pests you have on your lawn?” said the man on the left.

I won’t bore you with the details.

But I will share this trick: You squirt dish soap into a bucket of warm water, and pour it onto the spots where you see pest damage. In one to five minutes, the bugs will surface.

And this is where the action really picked up. Both men squatted onto their heels, and examined the turf.

It was mole crickets.

A whole show about turf grass! I sighed, watching the credits roll.

While deciding what to do next…

I had an hour to spare before meeting up with a friend. We’d made plans to catch “Murder She Said,” an Agatha Christie movie at the retro theater. I looked forward to the outing, although I doubted it could top the show about turf grass. With sixty minutes of free time, I faced a dilemma: should I work on my short story, or exercise?

I had wrenched my back earlier after reprogramming my landlady’s timer as she fumbled through the directions in the dim hallway, and on Saturdays I normally lift weights, but with those sore back muscles…

I bent over to fish the weights out from under the bed, and the muscles in my lower back went into spasm. I couldn’t move.

Lying on the floor contemplating the ceiling, I decided it might be a good idea to stop saying “yes” to everything.

To which I immediately said, “Yes!”

Intrigue at the Laundromat
Squirrels in the Doohickey