Intrigue at the Laundromat 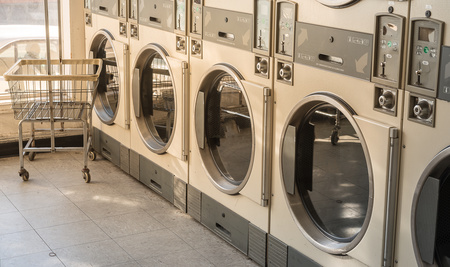 I was at the laundromat on a Friday morning washing the big stuff—comforter, mattress cover—the stuff too big to cram into my landlady’s washer. It was just me and three others: a geeky-looking guy with earbuds reading a book on Communism; a woman covered in tattoos sorting through newspapers; and a blonde in a purple pants-suit standing at the dryers.

While my stuff spun dry, I sat in my car with a clear shot of the laundromat, feet on the dash, reading a detective novel. Suddenly a cop breezed by my open window, marching a young guy in handcuffs straight through the laundromat, past the blonde who fell back a step, and out the door.

I roused myself. “That was weird,” I said, checking my lumpy load in the dryer. I added a couple more quarters.

The blonde looked over with worried eyes.

What can you say to that?

The geek and tattooed lady got real fascinated with their reading.

Her fiancé sat in the back seat of the police car, his head turned away. The blonde sighed a lot as she folded her sheets, watching him. The cop nosed around an RV parked nearby. I figured it belonged to the blonde and her fiancé; maybe they were on their way through town, decided to catch up on laundry, and he loped off to hold up a nearby liquor store. I wanted to know the story, but didn’t want to pry.

Then again, maybe she needed to talk.

“Are you okay?” I said. Stupid question.

“It depends on what happens,” she said.

I couldn’t read her; did she want a sympathetic ear, or did she want to be left alone? If I was a stranger in town and my fiancé got arrested, I’d want the sympathetic type to sort out the mess in my head. But not everyone wants a fix. An ear, yes. Not a mouth to go with it. So I kept mine shut, and hovered nearby in case she wanted to talk.

She went back to sighing, snapping her towels as she folded them, occasionally glaring at her fiancé stuck in the heat. Was the cop making him sweat it out? Thirty minutes later, they drove away.

By then, I had my feet back on the dash.

The tattooed lady appeared to be doling out the sympathy, leaning one hand on the counter while the blonde folded clothes, nodding. Over the top of his book, the geek’s eyes darted behind hipster glasses.

Sometimes, when I’m in a public place, I’ll think: what if some thugs wearing ski masks burst through the doors right now waving guns, ordered everyone to hit the floor, and then tied us up? We’re all strangers, and suddenly we’re bound together.

I had that thought as I pondered the three I might be bound to, and zeroed in on the tattooed lady. I’d seen her arrive in a beat up four-door. A man dropped her off, staying just long enough to wrestle the heavy basket of dirty clothes from the trunk. Her husband, I’d assumed, or boyfriend, judging by the peck on her lips before he roared off, no doubt to do manly things involving a six-pack and football while she did the woman’s work. That’s the story I spun. Watching her with the blonde, the way she leaned in with legs firmly planted, then rested back against the giant dryer, arms folded, looking like she’d heard it all before, been there before, had come out wiser—she didn’t look like someone who took the backseat to any man. Shows how wrong you can be, judging people.

I decided if I was held hostage in the laundromat, I’d want the tattooed lady tied to me.

The next week, I scoured the papers for any mention of the arrest. Evidently it was so uneventful it didn’t warrant a sentence. I don’t like stories that leave me hanging. Why was the kid hauled away in handcuffs? Did the blonde forgive him? Did she bale him out, or leave him sitting in a jail cell while she drove the RV to the Sierras? Maybe the tattooed lady joined her on some wild Thelma and Louise adventure.

And what about the hipster reading the communist book? There was something big there, something waiting to be discovered.

If I was a detective, I might nose around some. But I’m a writer. I’ll leave it to my imagination.

Friends by Default: Confessions from the Seventh Grade
The Day I Said Yes to Everything