Friends by Default: Confessions from the Seventh Grade 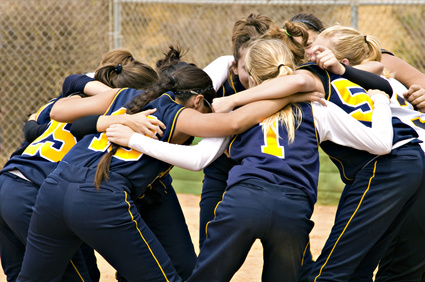 In seventh grade, I played quarterback in gym class. This was remarkable, as I usually landed on a team by default. When it came down to me and the girl who played tuba in marching band, tuba girl got picked every time. But one day Mrs. Wattenburger, our P.E. teacher who resembled a football, assigned me to play quarterback for one of the teams. And the other girls looked at me like, “Who are you again?”

Football for girls wasn’t the same as football for boys. We didn’t make actual body contact like boys did, pitching ourselves onto whoever carried the ball, piling up like dirty laundry. What the girls played was flag football, a delicate version of the more masculine butt-slapping, full-body tackling sport. The “flags” were two strips of cloth hanging on both sides of our waists, Velcroed to a belt. To tackle someone meant ripping off a flag, holding it aloft, and doing a happy dance.

My job as quarterback, in addition to pitching the ball, was to generate plays. Since the only athletic feat I had at the time was balancing on one foot, my ability to dream up plays involving pigskin was somewhat limited. But I soon discovered that I aced the huddle. Stick me in a group, and I’ll seize the leadership role, barking orders.

In the huddle we draped our arms over each other’s shoulders, something I hadn’t experienced since third grade when Stacey and I paraded like big shots around the playground, forever linked, until my family moved to the mountains and I never saw Stacey again. But in the huddle, we nestled under each other’s sweaty armpits—the cheerleaders, the drama club members, the science geeks, the tuba player, and me—all eyes focused on me, just me, for ten seconds while I spelled out the play.

“I’ll pretend to throw the ball to you, but instead I’ll run with it myself.”

And everyone nodded like this was a solid idea.

We clapped once to signify the end of the huddle, and got into position.

I hunkered over the ball, counted down, “Hike one, hike two, hike three,” then tucked it under one elbow and plowed head-first into a solid mass of female. When I picked myself up, still hanging onto the ball, I ran in the opposite direction, toward the wrong goal, then doubled back, everyone shouting and trying to catch up until the tuba player, who hadn’t moved since she took her position as tight end, ripped off my flag as I ran past and did the happy dance. My own teammate!

At least that’s the way I remember it. The reality is probably somewhat different.

But I do remember the huddle.

And calling the play.

The next day, the girls promptly forgot who I was, and I went back to slinking from class to class, berating myself for having failed to reach yet another dream. Not that I dreamed of being quarterback. But still. Anytime a dream seemed within reach—like when that curly-haired guy at the school dance settled his gaze upon me and it was love at first sight until his gaze skittered elsewhere, yeah, that close—when I failed to reach the dream, I kicked myself in my bell-bottom pants the whole way home. I muttered stuff like, “You stupid-head. Nobody wants to dance with you. Nobody wants to go out with you. Nobody wants you on their stupid, stupid team.” With a lot of sneering. Because failing wasn’t bad enough.

I did console myself with the fact that at least I wasn’t google-eyed over Tom Jones, like Jill Slater. She owned all his records, and watched his weekly variety show where he sang “It’s not unusual to be loved by anyone,” as he snapped his fingers and swung his hips, head slung back, white ruffled shirt split open. Because she hung out with me, I overlooked that minor flaw. Because I hung out with her, she probably overlooked my striped bell-bottoms, and the chain I wore around my wrist for three days thinking it was cool, until it turned my skin green.

Sometimes we don’t pick our team. Sometimes we’re the last two standing on the sidelines and we look at each other and say, “Wanna play?” I knew my friendship with Jill wouldn’t last long. The only thing we had in common was being misfits. And at some point we’d drift apart, when one of us met a girl who really was our tribe.

Secretly, I hoped I’d be the one to meet her first.

One Good Reason to Stay Alive
Intrigue at the Laundromat