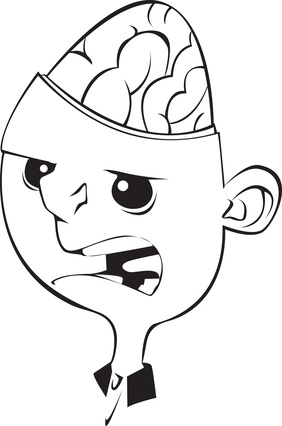 It’s Christmas. You’ve spent the last two weeks getting ready for the in-laws and your extended family to descend upon the house. Your husband wrestled the wooden sleigh-and-reindeer display from the garage and your son peeled himself from the couch long enough to nail a wreath to the front door, then you all drove to Santa’s Tree Lot and spent an hour bickering over which tree to buy. You made four trips to the mall to buy gifts and wrapping paper and tape and ribbon and bows, and you stocked up on eggnog and booze and sparkling cider. You bought a ham and sweet potatoes and green beans and Cream of Mushroom Soup for that goopy casserole that Uncle Joe loves, even though Uncle Joe is a pain in the…

That’s jumping ahead in the list of thinking distortions, to number seven: Name-calling.

Let’s stick to one distortion at a time.

You set the table with the best silver and linen napkins, and by God this day better be perfect, you tell yourself, because last year was awful; you all had colds and stayed home in bed, fuming. So nothing better go wrong!

Uncle Joe is late. As usual. So you keep everything snug in the oven, thinking it’s on warm, but it’s on high because one of your cousin’s kids fiddled with the knobs, and soon the ham and that goopy casserole are smoking up the house. You grab the potholders and pull the burnt ham from the oven and it falls on the floor and shoots across the waxed linoleum and the day is ruined. RUINED! You should have never taken this on, you’re a failure and everyone knows it.

That’s Either/Or thinking. Believing that situations are either wonderful or a complete disaster. That you’re either perfect or a waste of human skin.

Look at it this way…

That black mound that your Uncle Joe is now kicking around the floor…it’s a crispy dead pig, not the ruination of your life.

It’ll probably be your best Christmas ever.

But let’s say you’re not hosting a shindig. You live alone. You don’t have the money to fly clear across the country to see your family, or send gifts. You’re spending Christmas night alone at Denny’s eating over-salted slices of turkey and watery mashed potatoes pooled in gravy because you have a free coupon. It’s grim. It’s awful. Christmas is just an overblown retail holiday, you mutter. Bah humbug. You feel like a failure because you can’t even afford a cheap tie for your father.

You’re not a failure. You’re short on funds. At the moment. Set it aside for now. Smile at the waitress, who’s spending her Christmas serving a grump.

And come July, when you have extra cash in your pocket and you spy that Zen-like miniature golf game in the bookstore where you’re browsing and you think of your dad, who loves miniature golf, and this game is really miniature—the clubs only two inches high—and you picture him sitting at his desk teeing off…buy it. Send it along with a note.

It’ll be his best Christmas ever.

Who’s Manning the Digestive Tract?
Superbugs: The Game is On!